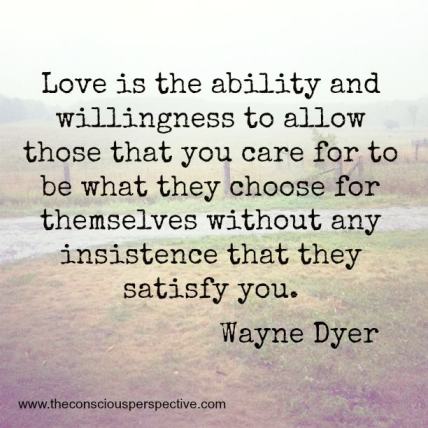 Self-destruction manifests itself in all of us; however, only the strong know how to battle it. You have to be a secure and mentally strong person to learn that you are worth fighting for.  If you see this behavior manifesting in the one’s you love remember you can’t change them no matter how hard you try.  It is insane to think we have that power.  Let it go!  We can pray for them, gently guide and point out self-destructive behavior but we can not change it.

I see in my own life and in my relationship with my daughter that I want her to be the young woman I know she can be.  It hurts me when she chooses the wrong path and I know too that it hurts me more than it hurts her!  Wayne Dyer’s words hit home with me.  I need to let her choose for herself what she wants for herself and her life without worrying about how it will make me feel or if it will “satisfy” my ideas for her life.

I found a list on Elite Daily that shared some self-destructive behaviors that perhaps we all have battled at one time or another.  I believe our loved ones suffering from mental illness don’t learn the first time as we might.

Are Friends With People Who Harm You More Than Help You

Your friends contribute to a large part of your happiness. They are one of the few things in your life that you can choose. When you hate everyone at work, in your family and just in general, your friends are the people can confide in.

They are the ones who are supposed to make you a better person. Self-destructive people have a tendency to hang out with people who are jealous, manipulative and self-serving. Their friendships are competitions, their secrets are fair game, and their flaws are problems.

Choose To Do Things The Hard Way

By now, we all know shortcuts and easier ways through certain situations. We know the consequences that come with most actions and the pain that can be involved. We base our decisions on facts, experience and knowledge. Self-destructive people know the easy way, but always choose to do things the hard, or wrong way. Whether it’s subconsciously or consciously, they have a knack for going about everything with some purpose of pain.

Opt Out Of Taking Chances For Of Fear Of Failure

Self-destructive people thrive on failure. They use it as their excuse for lost opportunities and failed attempts. They never grow as people because they have never overcome this fear. What self-destructive people don’t realize is that failure is not criticized; people only judge you on how well you rise after you fall. Failure is a weak excuse and one of the common reasons as to why self-destructive people never go anywhere in life, staying stuck in constant state of perpetual defeat.

Refuse To Let Anyone Help

There is nothing wrong with needing help in life. There is a common belief that asking the right questions is more valuable than knowing all the answers. Knowing when and how to ask for help is essential for a happy and healthy life. We all need to swallow our pride once and a while and learn to trust in others.

Self-destructive people don’t understand how to ask for help. They let their pride and their ignorance deter them from getting the help they need. They don’t see opportunity in others and find honor in suffering alone.

There is no shame in letting loose through drugs and alcohol on occasion. There is nothing wrong with relaxing with a glass of wine. However, using drugs and alcohol as coping mechanisms is not the same. Those who use alcohol to get through the day, as their courage for work and play, are inflicting self-harm. They think that drugs and alcohol are a distraction from their problems when, in reality, they are only creating more problems and more dependencies.

Date People You Know Will Hurt You; You Hurt The People Who Love You

Self-destructive people have a pattern of bad relationships. They choose the girl they know is selfish and the guy who doesn’t want a relationship. They get cheated on and stay, yet refuse to talk to their parents after a fight. They don’t acknowledge real love, only obsess about the people who are hurting them.

They do not value or even see when people actually care about them, usually choosing to lash out against them. Their bad relationships are just another distraction they use to keep from bettering themselves.

Spend Money On Frivolous Things And Not On Things You Need

It’s easy to buy sh*tty food every day rather than make a salad. It’s easy for self-destructive people to spend 20 dollars on a cab when they know they won’t have enough for dinner the next night. They do not think of their needs, only their momentary wants and desires. They have no real self-restraint and continually harm themselves by thinking only of present feelings and thoughts. They live on phrases of “YOLO” and store-bought candy. They take pills but never for medicine.

Live In Your Mind More Than Out Of It

They keep bad memories stored up for good days. Self-destructive people bask in their bad thoughts, letting it overcome the present and cloud the good. They inhabit their minds rather than living in reality and enjoying the moment. They are constantly remembering the bad and never the good, letting their regrets and mistakes ruin every opportunity and good moment. They don’t know how to let go of things and leave the past behind them.

Repeat The Mistakes You Should Have Learned From

Mistakes are okay; mistakes are forgivable… as long as you don’t make them again. Everyone messes up; everyone fails. However, we judge people on how well they redeem themselves. Not learning from your failures and mistakes is consciously making life harder for yourself. Refusing to look at your defeats and disappointments is not healthy and will never amount to anything greater than a succession of regrets.

Self-destructive people make decisions for the now, never for the next step. They do not think about consequences or long-term effects. They follow their fleeting whims and impulsive nature, letting their wants take precedence over their needs. They drink because they want to get drunk, but don’t think about work the next morning.

They buy that purse because they want it, but don’t think about their credit card debt. They never think about how their actions today will be construed later and like to think they are just being spontaneous.

It’s easy to second-guess ourselves. We do it all the time. Did we actually turn the coffee maker off? Did we lock the door? Should we have emailed our boss? However, you should have learned by now that second-guessing is as tiring as it is wasteful.

It’s something that can’t be helped but should be recognized and stopped as soon as it starts. Self-destructive people are constantly second-guessing themselves, usually wasting most of their time regretting and lamenting over things that aren’t worth the time. They waste their lives worrying and retracting rather than moving forward and making changes.

Lie And Never For The Right Reasons

Our parents always told us it’s okay to lie, as long as it’s for the absolute right reasons and not hurting anyone. Telling a lie because you don’t want to hurt someone or to help someone is not always wrong. However, lying because you can is different. Lying because it’s easy is not right. Lying is also a destructive path that only leads to regret, embarrassment and a loss of trust.

Only people hellbent on hurting themselves are out there throwing lies around. Only those who want to get caught are webbing stories and falling into traps of their own making.

Pay More Attention To Your Flaws Than Your Assets

It’s easy to remember the bad and even easier to forget the good. Self-destructive people have a tendency to ignore the good and only concentrate on the bad. They remember every negative comment and bask in the loathing that comes with hating yourself. They can’t get past a negative review, yet don’t even notice the good ones.

It’s easy to fall in down the hole of self-loathing, but only the strong know how to move past the negative and concentrate on the beautiful parts of themselves.

One thought on “Satisfaction NOT Guaranteed”